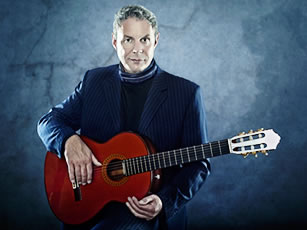 ". . . . I called the first set Brasilian Milestones and these were inspired by the great modern composers of Brasil who typically used classical elements from Baroque to Expressionism and always with an influence of Jazz and Latin.

I like to improvise on classical motives from those composers in a special contemporary perception of phrasing. Best described as Out of Time or for the friends of Classics: Tempo Rubato. The improvations will be totaly based on motives not on complete pieces. So what will happen will also be a surprise for me as well as for you.

This acoustic Classical Guitar - build by Toshio Kato in the Eighties - sounds quite soft like it should. So concentration is called for. Please sit back and relax during the Saudade on guitar as the Jazz Musicans call this style. It means something like The Beauty of Tearfullness or just Blue Bossa.

The other set is called New Tango, Blue & Bossa and Classical Sketches. As the title suggests this will be an improvisation on Latin-Traditionals and Classics. But also on Self-Compositions inspired by the jazzy syncopated feeling of the Bossa Nova . . . "

It does not matter on which meridian. Even not on the blue one. Lana?! You know: The song is you.