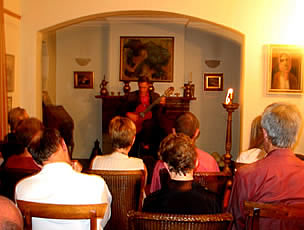 Bossa Nova: Out of Time

Improvisations on classical musical motives from Brazil on a concert guitar and in classical technique. Decently jazzy in the tradition of the Bossa Nova, but rhythmically adapted to the contemporary perception of phrasing. Maybe best described as “Out of Time”. Self arranged. Unplugged. Slightly melancholy and a little introverted. Cosmopolitan and cosmocultural. In a timbre not usually associated with an acoustic guitar. Concentration is called for, often from the listeners. Performances upto 20 minutes produce the best effects.

Thomas Schliwka, born 1960, Jazzer and genuine “coal child” from the mining region of Germany. Professionaly on the go as a Geophysist in Germany, Russia and South Africa. Studies on the classical guitar from the beginning of the seventies, later specially interested in Jazz stylistics, mainly those of South America. On the spot studies in Salvador and Rio in Brazil, but also in Buenos Aires, Montevideo, Iquitos, Valpa­raiso, Quito and Havana. Diverse performances in different Duos, Combos and Big Bands (also on the contrabass and drums), increasingly followed by solo performances in Germany and abroad in the last years. Mostly at cultural events and for friends of the Feuilleton. As this live recording at The Diplomat in Pretoria, South Africa.

“Bossa Nova: Out of Time” Based on motives from “Wave and Dindi” by Antonio Carlos Jobim, “Valsa Sem Nome and Sentimentos” by Baden Powell and “The Gentle Rain” by Luiz Bonfa.